Skip to main content
To provide you with the best experience, Brackenridge House Bed and Breakfast uses its own and third-party cookies on its website for technical, analytical and marketing purposes. By continuing to browse our site, you're agreeing to our use of cookies. Please consult our Cookie Notice for more information. 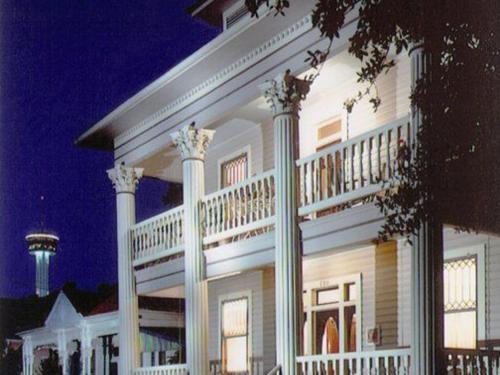 The Brackenridge House Bed and Breakfast .is in the heart of the historic German King William District of San Antonio. This two story Greek revival mansion was built around 1901 by John T. Brackenridge, nephew of philanthropist, George Brackenridge, who donated the land for Brackenridge Park. It was originally built and served as a four apartment flat. At that time, the house was located on South Alamo street.

On April, 1985 it was set on rollers, turned around, and moved back to occupy its present site on Madison street. Later that year it was acquired by Carolyn Cole, who tastefully restored the house, preserving its original front Greek columns, 12 foot high ceilings and stunning longleaf pine wood floors. This lumber was a favorite among builders during the Industrial Revolution. It is rare to find these days, since it was nearly decimated at the turn of the 20th century by irresponsible harvesting practices.

The Brackenridge House opened its doors as a bed and breakfast in 1986. Carolyn lived in thehouse and ran the inn for nine years. She received a restoration award from the San Antonio Conservation Society in 1987.

In 1995, the inn was sold to Colonel Bennie Blansett and his wife Sue. Bennie and Sue are life-long Texans well known for their Southern hospitality. They maintained a strong following and had an excellent reputation for 16 years.

Roland and Lily Lopez bought the Brackenridge House Bed and Breakfast in January 2011. They are committed to continue with its current reputation as a premier San Antonio bed and breakfast and to maintain the standards that the guests of the Brackenridge House have enjoyed since 1986 by offering excellence in service.

The Inn is filled with antiques and features breezy verandas on both the first and second floors in the front and rear of the house. The Brackenridge House Bed and Breakfast radiates Texas hospitality. It is all you could hope for in a Bed and Breakfast stay. You will discover comfort, convenience and pampering in an elegant Victorian setting, perfect for romance, rest, relaxation and recreation.